The collaboration, focused around a hilarious piece of video content, sees The Mountain, advertising his new brand, Heavy Bubbles – Sparkling Water That Makes you Sweat. The Game of Thrones star advocates carrying heavy bottles (schlepping) as best practice for sweaty urban fitness exercise. Revealed as satire, SodaStream appears as the only sane answer for all your sparkling water needs.

The campaign based on research drives home importance to the fact that consumers who carry full water bottles, with the intention of drinking, unnecessarily end up toting excessive weight throughout the day. The video highlights the importance of hydration as a part of everyday health and fitness wellbeing, yet offers SodaStream’s in-home sparkling water maker as a more practical tool to increase water daily water consumption

The campaign was created and produced by global creative agency Allenby.co.il Concept House and the videos were directed by New York based, award-winning director Vania Heiman. The feature uses a unique humoristic tone and style and is part of a broader campaign which includes a behind the scenes video and a Facebook page.

As holder of Europe’s Stronger Man title, Bjornson was chosen by SodaStream as the perfect ambassador for the campaign.

“Fun, revolutionary and disruptive campaigns are very much part of our culture”, stated Daniel Birnbaum, CEO of SodaStream. “We wanted to emphasize how ridiculous it is to continue to carry bottles home from the Supermarket, so we came up with this crazy, out-of-the box campaign. We know that this consumer habit is hard to break, so we brought Europe’s Strongest Man to help us”, he continued, with a wink.

While Bjornson needs absolutely no help carrying heavy weights, he did state, “I’ve been using SodaStream since I was a kid and was therefore thrilled to collaborate in this video. I’m always open to new techniques for exercising, but you’ve got to admit that carrying bottles home from the supermarket is a hassle and actually pretty stupid when we have an alternative such as SodaStream.” 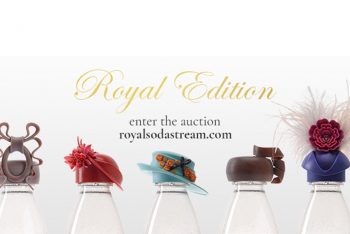